Konnoh Hachimangu Shrine was enshrined on the 15th day of the first month in the year 6 of the Kanji era (1092) during the reign of Emperor Horikawa, the 73rd emperor of Japan.

A descendant of Takamochi-Oh with his great-grandfather as Emperor Kanmu, as well as the governor of Chichibu, Taira-no-Takemoto made a distinguished contribution for the force lead by Minamoto-no-Yorinobu to suppress the turmoil of Taira-no-Tadatsune, dedicated two of the eight military flags, the sun and moon to Mt. Myouken in Chichibu, and worshipped them as hachimangu. Takemoto’s son, Taketsuna and his heir Shigeie along with their over 300 troops were the first to rush to join the military force lead by Minamoto-no-Yoshiie for the Gosannen war (1087), and conquered the fort in Senboku-Kanazawa. Rewarded for his accomplishment, Taketsuna was given the name of Kawasaki-Tosanokami-Motoie and Musashi-Yamori-no-Sho (the territory in Musashi-Yamori). Yoshiie was convinced that the blessing of the Hachiman spirit Motoie worshipped brought the victory in the war, and had the moon flag of Mt.Myoken owned by Motoie to be dedicated to a Hachimangu at the current location.

After Shigeie took over the leadership of the clan, Emperor Horikawa awarded the name of Shibuya for the merit in dismissing intruders at the imperial palace. The Shibuya clan established its main residence castle around the Hachimangu, and worshipped the shrine as its family guardian. The establishment is considered to be the birth of Shibuya, and a fortress stone of Shibuya castle has been preserved on the grounds of the shrine.

After been named as the “Hachimangu” or “Shibuya-Hachimangu”, the Hachimangu later changed its name as “Konnoh-Hachimangu” commemorating the fame of Konnohmaru.
Because the territory of the Shibuya clan encompassed seven regions of Musashi-Yamori-no-Sho (such as Shibuya, Yoyogi, Akasaka, Iikura, Azabu, Hitotsugi, and Imai), the Hachimangu has been a popular main local shrine with venerations in the Aoyama and Shibuya regions centered around Kamakura Road (currently known as Hachiman Blvd.) and Ohyama Road (currently known as Aoyama Blvd. and Dogenzaka). 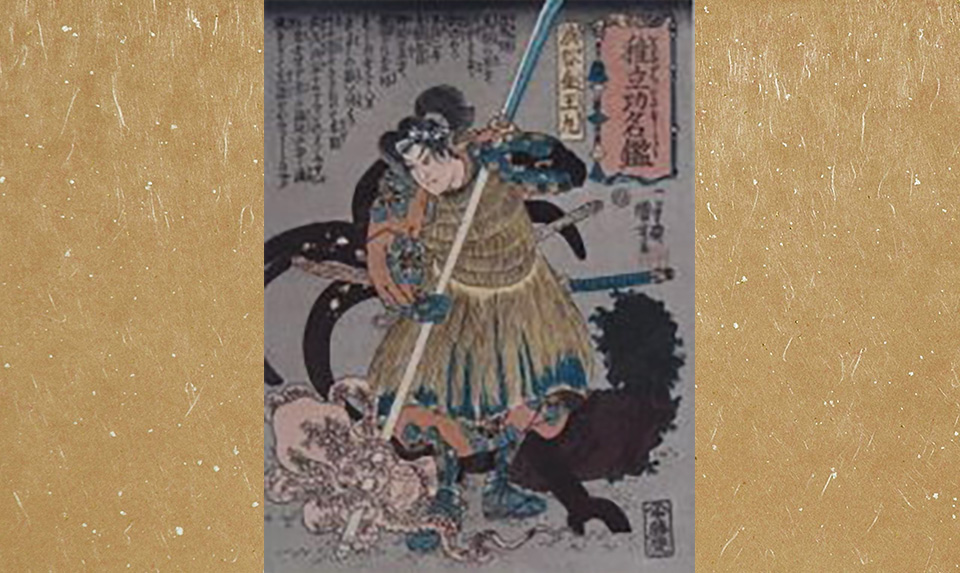 A son of Shibuya-Heizoh- Shigeie, Shibuya-Konnohmaru-Tsunemitsu was born on the 15th day in the eighth month of the first year in the Eiji era (1141). Because Shigeie had not been blessed with a child, he and his wife had been visiting the Hachimangu, praying for a conception. Shigeie had a spiritual dream that Kongoh-Yasha-Myooh (Vajrayaksa, one of five wisdom kings and the third type of deity after Buddhas and bodhisattvas) was conceived in his wife’s womb, and subsequently, the couple was blessed with a fine boy. Shigeie named his son, “Konnohmaru”, taking the first and last kanji characters of the Myooh.

At the age of 17, Konnohmaru joined the military force lead by Minamoto-no-Yoshitomo, and established his fame in the Hogen Rebellion (1156). In the subsequent Heiji Rebellion (1159), Yoshitomo was defeated. While en route to escape to the east, he was betrayed and killed by his retainer, Osada-Tadamune in Owari –koku-Noma (in the current Aichi Prefecture). Konnohmaru traveled to Kyoto, reported the betrayal to Tokiwa-Gozen (Lady Tokiwa), then tonsured in Shibuya, became known as Tosa-no-bo-Shohshun, and prayed for the spirit of the late Yoshitomo. (In the Tale of the Heiji, it is described that Konnomaru became a priest, traveled around Japan, and prayed for the spirit of Yoshitomo.)

Y oritomo confined himself in the Hachimangu where Konnohmaru was, and prayed for the punitive victory against the Heike clan before leading his force.

After the battle of Dan-no-ura (1185), Yoritomo accused Yoshitsune of betrayal, and ordered Shohshun to kill him. Being unable to turn down the order, Shohshun raided the residence of Yoshitsune with a troop of 100, and met his fate as a brave military general.

Konnohmaru appears in the Tale of Heiji and a play written by Chikamatsu. As Tosa-no-bo-Shohshun, he appears in tales such as the Genpei Seisuiki (The Rise and Fall of the Genji and the Heike), Azuma Kagami (historical and other stories of the Kamakura Period), and the Tale of the Heike. His valor is well commemorated in these historical documents.

(Designated as a tangible cultural property by Shibuya Ward of Tokyo) 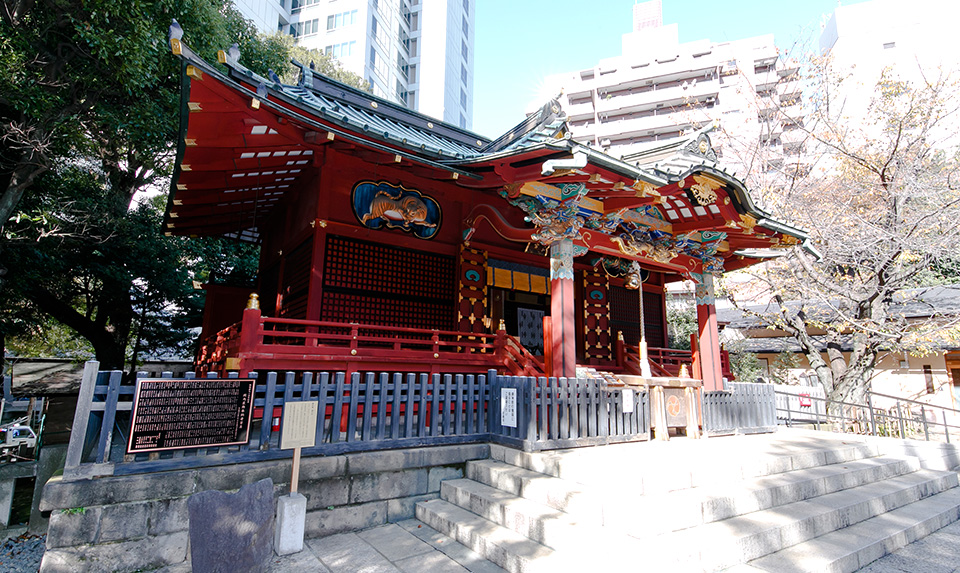 The current shrine structure was built by Aoyama-Tadatoshi (Elder in the shogunate government) and Lady Kasuga in the year 17 of the Keicho era (1612) during the reign of (Tokugawa-)Hidetada, the second shogun in the Tokugawa Shogunate government.

When Takechiyo (later known as Iemitsu) was 9 and Kunimatsu (later known as Tadanaga) was 7, it was rumored that Kunimatsu would be appointed as the third Shogun of Tokugawa. Lady Kasuga, a wet nurse for Takechiyo and Aoyama-Hohki-no-kami-Tadatoshi, a guardian of Takechiyo were concerned about the rumor, and Hohki-no-kami diligently prayed for Takechiyo to his tutelary deity at the Hachimangu while Lady Kasuga made an 80 ryo (equivalent of approx. 86,000 US dollars at the current value) prayer contribution.

Later, in wishing for the spiritual protection at the time of Iemitsu’s armor fitting ceremony, Hohki-no-kami contributed a large volume of lumber and Lady Kasuga contributed 100 ryo (equivalent of approx. 107,000 US dollars at the current value) for the construction of the shrine.

The shrine is built in the gongen-zukuri , an architectural style of a Shinto shrine complex structure, and the current structure preserves the style in the early Edo Period. It is one of the significant architectural structures in the Metropolitan Tokyo area. As a relatively recent shrine architecture, it has a rather simple look, accented with magnificent yet strikingly graceful carvings positioned in various parts. In particular, baku (the Japanese dream-devouring supernatural creature) and tiger are carved on the narrow openings in a shape of a window on both sides of the front of the outer shrine, and this type of decorations is rarely seen elsewhere. While baku symbolizes a prayer for a stable society, tiger symbolizes a prayer for rightful politics. 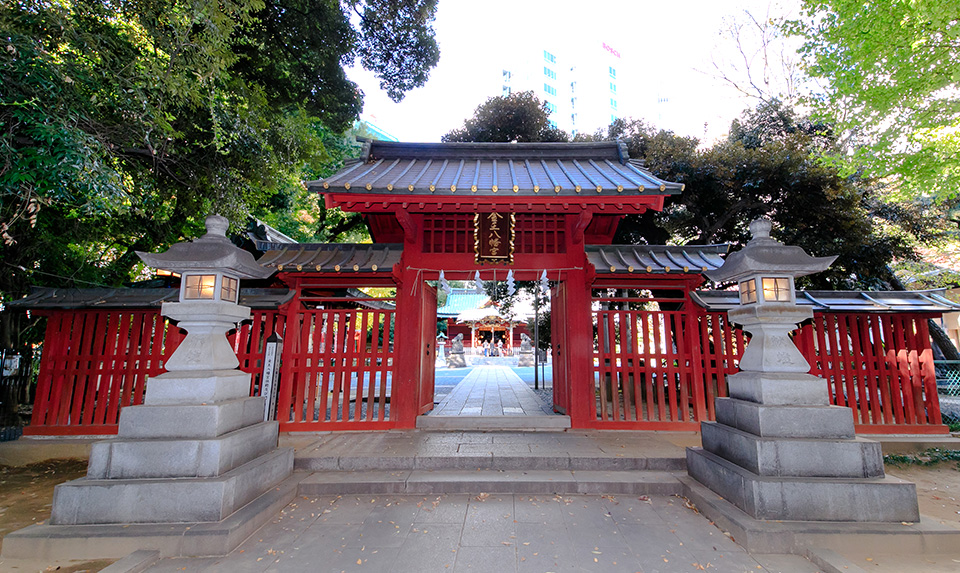 Though it is not clear when the gate was erected, there is an entry in the year 6 of the Meiwa era (1769) on Jishi-Koseki-Jisha-choh ( Records of land rents, places of interests, temples and shrines), and the engraving on the back of the plaque on the gate indicates the first year of the Kyowa era (1801).

The entry in 1769 indicates, “…..to provide more security to the entrance of the Hachimangu, the inner length of the horizontal pillar on the gate is 8 feet, with double doors, 6 foot fence on both sides, tiled roof, and 22 foot fence with diagonally crossed bamboo sticks on both sides are installed…..” , and it is speculated that the gate was added at that time though there are some differences from the current gate.

In 1801, Aoyama-Tadahiro of the Sasayama clan domain in Tanba made a 150 ryo (equivalent of approx. 81,000 US dollars at the current value) contribution, and a large scale repair project was underway. Along with the architectural style evident on the gate, it is speculated that the gate was erected around that time.

The shrine is built in the gongen-zukuri , an architectural style of a Shinto shrine complex structure, and the current structure preserves the style in the early Edo Period. It is one of the significant architectural structures in the Metropolitan Tokyo area. As a relatively recent shrine architecture, it has a rather simple look, accented with magnificent yet strikingly graceful carvings positioned in various parts. In particular, baku (the Japanese dream-devouring supernatural creature) and tiger are carved on the narrow openings in a shape of a window on both sides of the front of the outer shrine, and this type of decorations is rarely seen elsewhere. While baku symbolizes a prayer for a stable society, tiger symbolizes a prayer for rightful politics.

The Inscription on the Back of the Plaque

“During the time of Giryu, the Hohin (the highest title “Seal of the Law” in Buddhist clergy) and the 41st chief priest at Tohfuku Temple of Shibuya, on an auspicious day in the eighth month of the first year in the Kyowa era and the year of Kanototori (1801), Narushima-Hanzo-Fujiwara-Kazuyasu, Vassal of the Saijo, Regards”

(a historical cherry tree, designated as a natural monument by Shibuya Ward of Tokyo)

Konnoh-zakura is a Japanese cherry tree variety called Chohshu-hizakura, and one of the rare varieties with its petalled stamen and single and double flowering blossoms mixed on each branch.

According to the “Chronicles of the Shrine” on the Hachimangu, Minamoto-no-Yoritomo stopped at the residence of Shibuya-Takashige en route to return to his headquarters after the victory in the Yasuhira sweep, and dedicated his sword to the Hachimangu. On his visit to the shrine, Yoritomo paid a visit to the carving of Konnomaru, reminiscent of Konnohmaru’s loyalty to Yoshitomo, the father of Yoritomo, thus made a strict order to preserve the legacy of Konnohmaru for coming generations, and had a cherry tree known as Usawasure-no-sakura on the grounds of his residence in Kamegaya of Kamakura transplanted to the grounds of the Hachimangu, and named the tree, “Konnoh-zakura”.

The cherry tree was introduced in a local topography, a popular form of publications during the Edo era (1603 -1868), and became known as one of three distinguished cherry trees in the Edo area (now known as Tokyo). Konnoh-zakura has been preserved to the present with seedling and dedicated care.

The tree is accompanied by a monumental inscription of haiku by Matsuo-Basho (1644 – 1694, the best known poet of the Edo era) dedicated by his pupils.